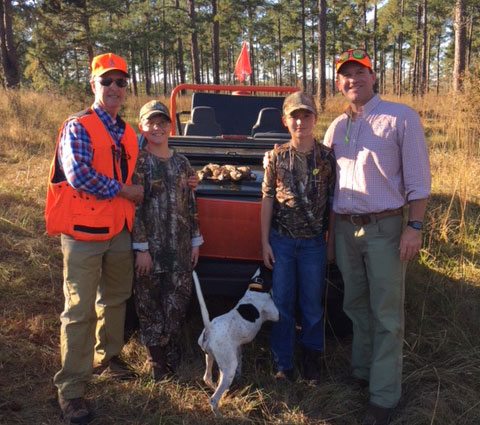 I must admit that my subject headline above really caught my eye the other day. In reading the article, it seems that the hunter had laid down a loaded shotgun, off safety, and walked away to do what men sometimes do in nature when no females are around. His dog stepped on the gun, and inadvertently pulled the trigger shooting the hunter in the back. I was pleased to read that the hunter is going to be OK, but you just can’t fix stupid, and the fault lies solely with the owner of the shotgun.  I well remember once killing a quail that fell on the other side of a barbed wire fence. While I was reasonably certain that the quail was dead, I decided to take my shotgun with me. I was actually more afraid of getting my rear end pierced by barbed wire than I was of my shotgun. What I should have thought about was what option was behind door #3, and that was Pop. When he saw me climbing the fence with a loaded single gauge, cock action shotgun that was NOT cocked, he was not a happy father. Suffice it to say, I would have preferred that the barbed wire burn my butt than what actually did burn it.

As many of you who read my blogs have heard me state before, I take more pride in our safety program than almost any other aspect of Riverview. I can’t tell you how many times I have had guests thank me for that emphasis on safety because that guest was about to go quail hunting in the field with a customer with a shotgun in his hand. At close range a shotgun is about as effective weapon of destruction as one would want to encounter. That’s why riot police use them because even the bad guys fear a shotgun up close and personal.

I’m saying a lot of this leading up to the fact that I finally felt that my triplet 12 year olds were strong enough, and safety conscious enough for their first quail hunt. Eva had no desire to go although she loves picking up doves for her Papa. She quite often wryly comments on dove hunts.” Papa, if you can see the doves, you can still kill them, but Papa, there are birds all over you that you can’t see”. Young eyes!! At any rate, I took her brothers, Keaton and Nate, and could not have been prouder of them. They each killed the very first quail that they ever shot at, followed by a long dry spell which all of us hunters have experienced. I only allowed on grandson on the ground at the time, and only used one dog. My primary goal, as with all of my guests, was that it would be a safe hunt. Each of them pulled off of shots that they could have taken out of an abundance of caution, and that may have been the thing that I was proudest of. They also exhibited one trait of all great hunters, and that was the ability to alibi as to why a bird was missed. Keaton actually closed the hunt with a beautiful double, and I decided to quit while ahead.

Now to completely change the subject, I have often heard folks say that we shouldn’t knock the weather because without it, most folks would have nothing to talk about. Let me just say it has been a cooler than normal fall here. However, Tuesday here reached a high of 78 which was almost a record while today we will struggle to reach the low 40’s. Cold weather is especially hard for me since my office and my son, the Eskimo Boy, are in the same wing. I swear I believe he was raised by Polar Bears. Both of the ladies in the office have little heaters that they keep on and under their desks. Martha keeps trying to get me to do the same, but my pride will not let me—yet!

I’m just about ready to retire and live off of my savings. I’m just not real certain what I will live on after Thursday of next week. I want to close this blog by again quoting that great American, Lewis Grizzard who said,” Life is like a dog sled team. If you ain’t the lead dog, the scenery never changes.” Lewis and I also shared a friend who blames every typo and everything that goes wrong with his messages on Siri. This one is for you, John.” You know you are a bad driver when Siri says, in 400 feet, stop and let me out.” I wish that I had been as smart as Siri one night many years ago on that ride up Wildcat Canyon!