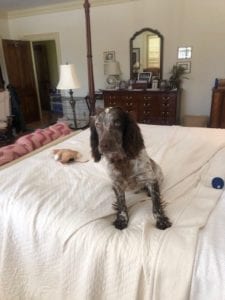 Due to Martha’s many doctor’s appointments and trips to Augusta University, which by the way can’t be gotten to from here in less than five hours, I was unable to take my English Cocker, Rebel, into my home as early as I wanted to. Since Martha has gone to be with the Lord, Rebel has now come to my house full time.

During the past six months when I could have gotten him, Jerry Cooper kept him. By the time I picked him up, he was already crate trained. He also had sit and stay down pat as well as heeling. The only things that I have had to work with him on is “down” so that he does not jump on everybody and everything in sight. I also have him fetching to my hand although I have no intentions of training him to be a hunting dog.

What he has done is bring a great deal of joy into my broken heart. The only thing Rebel wants is to be loved, and I am giving him plenty of that, He is reciprocating in spades. He is even sleeping in the bed with me. I don’t know what it is about English Cockers and ears, but he loves to lick my ears with his sloppy tongue. When I could not get him to stop, I put him back in his crate night before last. Evidently, something clicked with him as he was just a snuggle bunny last night with no licking.

It has been a long time since I have had a puppy. As I have grown more “mature”, I find it very easy to take a 20-minute power nap after lunch. The other day I dozed off while rubbing his tummy. When I woke up, I thought someone had led a confetti parade through my room. I quickly realized that Rebel had been able to reach a box of Kleenex and had destroyed every tissue in there. It took me thirty minutes to pick up all of the tissues. There was no need to fuss at him since he would have had no idea what he had done wrong. I did make a note to self to keep the Kleenex out of his reach. I have always said that I would like to be the person that my dog thinks that I am!

In closing, this is a strange new world that we are living in with this Covid 19, and all of the rules about how to reopen businesses, and which ones should be opened, and which ones stay closed. It seems that the rules vary from state to state. We are so isolated out here on Riverview that the only thing that I am missing is my Sunday worship attendance. My prayer for all of you is that you, your families, and your business will get through this rough patch of ground in decent shape. May God bless and protect us all.